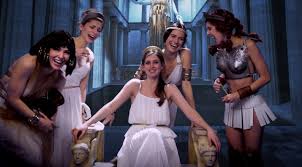 Surprisingly, and most definitely to my relief, the second scene was not as bad as the first. I think the need to stick somewhat to Aristophanes opening for MY opening gave me a little trouble--that and my utter fear it was way over my head! But once I got that on paper, it became easier to see where I wanted to change, add, or absolutely delete lines. The second scene seemed to roll on the page; I had given even more thought to how I would constuct that one as it was not following the original piece. In truth, the idea is exactly like the original--the men and women bicker to the point of losing their tempers. But I am not using men or women choruses--I instead have a plethora of Shoprite employees to replace those. What seems to be such a great deal of fun is the fact I have characters to work with--my coworkers--so I do not need to create people entirely from scratch. It gives my characters their voices, complete with complaints, drawls, accents and often  a loud, sarcastic tone, but these are real voices from the very types of people I am focusing on. The enthusiasm from my coworkers over their personas being used for my play is overwhelming--and for me it is hugely helpful. When I start to picture how I want a scene to go, I visualize these people and know the reactions I will have. Sometimes I even hear their voices-in my head--in response to the questions posed to them . 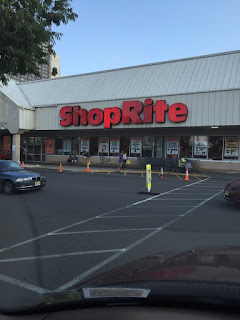 Usually these are funny lines even if the people in question are angry.  I have learned over the thirty nine years of working in this environment that most of us will respond more quickly with humor or sarcasm than outright bitterness. Once someone is finished venting, they go back to work--until somebody else brings up the very thing they are complaining about. I guess the luxury of knowing the "characters" in my story as real people who do find themselves being repressed, disrespected, and underestimated by a group of misogynistic men in power, is a gift that enables me to write some funny things that would undoubtedly happen if this fiction became fact. Those characterizations include the men I work with as well as the big cheeses I work for. This play does not require any true anger; only a sense of "right is might" and "power to the people" (right on)...Enough of my cliches for now. On a brighter note, as far as my bibliography goes, I had found about three more pieces that I liked very much and then the trail went cold. Until I ordered a book for my other class on Creative Nonfiction; its called Writing True by Perl and Schwartz, and as I read through the chapter headings I would be visiting, the realization came to me (finally) that although I am adapting Aristophanes classic piece, I am doing it in a very realistic setting. The facts are fictional but the people I am using as my models--who are very flattered to be included and have all given their consent to borrow their names and/ or personalities---those folks are very real. The setting is also real so my Lysistrata becomes a story filled with a nonfictional group of characters in a nonfictional grocery store. Even my customers--who will pop in during the next scene (I hope) are the real deal. So, after reading through a large portion of the Perl and Schwartz book, I recognize the potential it has for my writing of this tale. As for this Thursday, I cannot wait to try the cold reading of one of my scenes with my group and Dr. Z. Now I have to decide which one I want (or dare) to hear out loud. 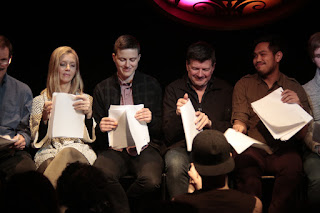